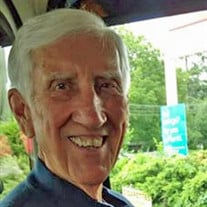 Robert L. (Bob) Garner was born July 16, 1931, the oldest of three children to the late Lillie Iris Lee Garner and William Chester Garner. A veteran of the United States Air Force, Bob received a Bachelor of Science degree in accounting from the University of Tennessee in 1957. In 1959, he received a Certified Public Accountant Certificate. Later that same year, he married the love of his life, Helen Brown Garner and in his words “the prettiest girl in Lawrence County.” Professionally, Bob was a founding partner of Winnett Associates, held memberships in the Tennessee Society of Certified Public Accountants, American Institute of Certified Public Accountants, past board member of Shelbyville & Bedford County Chamber of Commerce, past president and 45 year member of Rotary International, where he was recognized as a Paul Harris Fellow. He chaired the development committee of the H.V. Griffin Park Complex, and served on the board of directors of the Tennessee Walking Horse National Celebration for 18 years with 3 terms as chairman of the board. Bob was inducted into The Celebration Hall of Fame in 2002 and the Bob Garner Room in the Calsonic Arena was named in his honor. He was a champion of numerous civic and charitable causes and held many leadership roles at First Presbyterian Church in Shelbyville where he was a member for over 50 years. He was preceded in death by his son Greg Garner, and sister Sassy Garner Blackwell. He is survived by his wife of 59 years, Helen Brown Garner, a brother Bill (Kathy) Garner, Lake City, SC, and several nieces and nephews. In lieu of flowers, donations can be made to the Greg Garner Memorial Scholarship Fund @ First Presbyterian Church, 600 N. Brittain ST., Shelbyville, TN 37160. Funeral services will be 11:00 A.M. Wednesday, February 6, 2019, at First Presbyterian Church. Reverend Allen Cross will officiate with burial to follow at Hillcrest Memorial Gardens. Visitation will be 4:00 – 7:00 P.M. Tuesday, February 5, 2019, at First Presbyterian Church. Feldhaus Memorial Chapel is assisting the family with the arrangements.

The family of Mr. Robert "Bob" Garner created this Life Tributes page to make it easy to share your memories.

Send flowers to the Garner family.