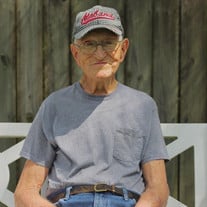 Mr. Robert “Bob” Lynn Fullerton, age 88, of Shelbyville, passed away Sunday, December 9, 2018. Graveside services, with military honors, will be 2 PM Sunday, December 16, 2018, at Old Orchard Cemetery in Petersburg. He was born January 25, 1930, in Petersburg, to the late Eugene and Daisy Mai Holt Fullerton. A veteran of the United States Army, he was retired from Eaton Corporation. He met his wife in Japan during the war, and they enjoyed 62 years together before her passing in 2015. Preceding him in death was his wife, Nubuko Kanao Fullerton, brothers, William Fullerton, Larry Fullerton, and John Fullerton. Survivors include a brother, Charles Fullerton, of Lewisburg, a sister, Judy Bean, of Petersburg, and sister in law, Wista Fullerton, of Lewisburg; several nieces and nephews. Memorials may be made to the Wounded Warrior Project. Feldhaus Memorial Chapel is assisting the family with the arrangements.

The family of Mr. Robert Lynn Fullerton created this Life Tributes page to make it easy to share your memories.

Send flowers to the Fullerton family.