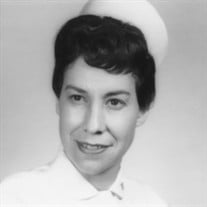 Mrs. Shelby Lea Nichols, age 89, of Shelbyville, passed away Monday, August 29, 2016. Shelby grew up in the coal mining regions of Fentress County and Anderson County where her father was a coal miner, and her mother raised Shelby and her six siblings. Shelby graduated from Nashville General Hospital Nursing School, and worked as a nurse at Nashville General Hospital. She was married to Herbert E. Nichols for 53 years. Shelby was the Company Nurse at Jack Daniel Distillery in Lynchburg for 26 years at her retirement in 1996. She was also an active member of the Middle Tennessee Chapter of the American Association of Occupational Health Nurses (AAOHN). Shelby was active in the Republican Party where she was an Alternate at the Republican Women’s National Convention in 1971, and the President of the Bedford County Federation of Republican Women in 1972. She was a campaign worker for Senators Howard Baker and Bill Brock, and for Governors Winfield Dunn and Lamar Alexander. Shelby was also a member of the Shelbyville Garden Club. Funeral services will be Friday, September 2, 2016 at 1 PM, at Feldhaus Memorial Chapel. Burial will follow at Hillcrest Memorial Gardens. Visitation will be Thursday from 3:00-7:00 at the funeral home. She is preceded in death by her husband, Herbert Edward Nichols, Sr., parents, William Albert and Fronia Elsie Brown Hall, sisters, Myrtle Lily Hall Putman, Arxie Hall Leinart, and Jewel Dean Hall Nash, and brother Clarence Henry Hall. She is survived by a son, Herbert E. “Nick” Nichols, Jr. and his wife Cathy, grandchildren Samuel Clark Nichols and Hannah Marie Nichols of Murfreesboro, TN, sisters, Arlene Sue Hall Cook and Peggy Delores Hall Hogan, both of Dandridge, TN, and Linda Gail Hall of Franklin, TN. Feldhaus Memorial Chapel is assisting the family with arrangements.

Mrs. Shelby Lea Nichols, age 89, of Shelbyville, passed away Monday, August 29, 2016. Shelby grew up in the coal mining regions of Fentress County and Anderson County where her father was a coal miner, and her mother raised Shelby and her six... View Obituary & Service Information

The family of Mrs. Shelby Lea Nichols created this Life Tributes page to make it easy to share your memories.

Send flowers to the Nichols family.