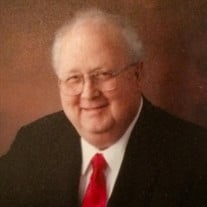 Dr. Terrell Davis Blanton (Ted) went to be with his Lord and Savior on April 12, 2017. He was born on April 18, 1938 to George T. and Wynona Davis Blanton. He passed away due to injuries after a fall in January 2016. Ted was a devoted husband, loving father, adoring grandfather, and a caring physician. He leaves to cherish his memory his wife of 60 years Barbara (Yarbrough) Blanton, two children: Douglas Blanton and Dianne Watson (Michael), and six grandchildren: Ruth Ellen, William, and Wesley Watson, Chase Blanton, and Ted and Lillian Dickey. He was preceded in death by a daughter, Donna Michelle Dickey. A graduate of Millsap’s College in Jackson, Mississippi, he was a member of Alpha Epsilon Delta Honors Society. After graduating from The University of Mississippi Medical School in 1962, Dr. Blanton practiced medicine for fifty- five years. He was a Fellow of the American College of Surgeons, Fellow of the Academy of Otolaryngology, Paul Harris Fellow and the President of the Central Medical Association in Jackson, Mississippi. He was a member of the American Medical Association, the Tennessee Medical Association, the Mississippi State Medical Association, and the Southern Medical Association. He loved his patients and cared for them with a healer’s heart. Ted served in the Navy from 1961- 1974 where he earned the rank of Commander. He received many commendations for his exemplary service. The discipline and patriotism he learned in the Navy never left him as his family and friends can attest. He was an artist and musician. He played the banjo, drums, guitar, and piano. He was a member of the band The Docs of Dixieland, which cut records and played at events such as The Satellite Ball in Washington D.C. (He was known to dance the night away with his wife at Presidential Inaugural Balls.) Since moving to Shelbyville, he has enjoyed nearly weekly meetings with the R.O.M.E.O. Club (retired old men eating out), reading books suggested by friends and family, and recounting the stories of his childhood and bragging about his grandchildren to anyone with two good ears. Throughout his life, he was an active member of the Church. He and Barbara attended First Baptist Church in Shelbyville, where he was a Deacon. Ted was a Gideon, taught Sunday School, and loved the members of his Sunday School class. He will be greatly missed by his former patients, friends, the community, and his family. Visitation will be held at First Baptist Church on Sunday, April 16th from 2-5 PM with service following. Feldhaus Memorial Chapel is assisting the family. Ott and Lee Funeral Home, Forest MS will assist the family in Mississippi. Visitation is 5-8 PM Monday at Ott and Lee Funeral Home, Forest, MS. Service will be at 11:00 AM Tuesday at Good Hope BaptistChurch (7676 Old Highway 80, Lake, MS). In lieu of flowers, please donate to Hinds Community College, where Barbara and Ted met, in Ted’s name. Hinds Community College P.O. Box 1100 Raymond, Mississippi 39154 (601) 857-3630

Dr. Terrell Davis Blanton (Ted) went to be with his Lord and Savior on April 12, 2017. He was born on April 18, 1938 to George T. and Wynona Davis Blanton. He passed away due to injuries after a fall in January 2016. Ted was a devoted husband,... View Obituary & Service Information

The family of Dr. Terrell Davis "Ted" Blanton created this Life Tributes page to make it easy to share your memories.

Dr. Terrell Davis Blanton (Ted) went to be with his Lord and...

Send flowers to the Blanton family.