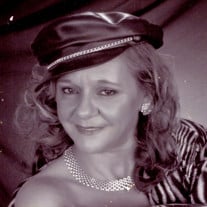 Mrs. Theresa Lynn McGowan Allen, age 51, of Shelbyville, passed away Wednesday, July 6, 2016. Funeral services will be 2 PM Friday, July 8, 2016. The family will receive visitors 11 AM until service time Friday at the funeral home. She was... View Obituary & Service Information

The family of Mrs. Theresa Lynn Allen created this Life Tributes page to make it easy to share your memories.

Send flowers to the Allen family.