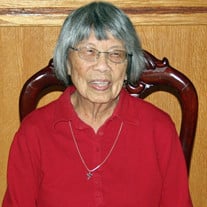 Mrs. Wanda Wong Lee passed to her reward Monday November 26, 2018 Born in the Oakland, California, she then moved to Walnut Grove, and Stockton where she graduated from High School in 1937. Her picture as a child was included in a book about the Chinese communities in Northern California, Bitter Melon. She held jobs growing up in California that centered around the agricultural industry, until WWII broke out when she joined Lathrop Engineering and worked for the Army Corps of Engineers. She volunteered to go to the Philippines but they determined she was too small. In 1948 she married Alfred G. Lee, a veteran who served in the European arena and eventually stationed at Ft. Bliss in El Paso, TX. While visiting friends in the El Paso after their marriage they started and ran a grocery business with two stores until 1976. During that time, they raised three children, one of whom came to Tennessee. In 1989 her husband had a debilitating stroke and she cared for him by herself (still under 100 pounds) until his death in 1998. At that time her daughter Debbi convinced her to move to Bell Buckle, Tennessee with her and husband Steve Mills. She is preceded in death by her husband and a son Milton Buck Lee leaving behind two children, Debra J. Lee (Mills) and Allan D. Lee. Devoted grandchildren include Melissa Mills, Michael Lee, Theresa Lee, Daniel Lee, Troy Lee, Lorann Lee and Tiffany Lee and one great granddaughter Kendra Lee. Her direct descendants and extended family are located in Alabama, California, Florida, Michigan, Mississippi, Missouri, Nevada, Oregon, Texas, Washington and of course Tennessee. As recently as a few days before Thanksgiving she enjoyed a Tennessee family gathering in Nashville. After a few days of illness, she passed peacefully with her local family in attendance, and comfortable with seeing her other family and friends who preceded her. The family will receive visitor 4-8 PM Friday, November 30, 2018, at Feldhaus Memorial Chapel. Burial will be in Ft. Bliss Cemetery in El Paso under the direction of Martin Funeral Home in El Paso, Texas. Memorials may be made to Hospice Compassus, 1805 N Jackson Street, Suite 11, Tullahoma, TN 37388. Feldhaus Memorial Chapel is assisting the family with the arrangements.

Mrs. Wanda Wong Lee passed to her reward Monday November 26, 2018 Born in the Oakland, California, she then moved to Walnut Grove, and Stockton where she graduated from High School in 1937. Her picture as a child was included in a book about... View Obituary & Service Information

The family of Mrs. Wanda Lee created this Life Tributes page to make it easy to share your memories.

Send flowers to the Lee family.