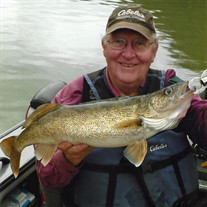 Louis Wayne Bomar, age 73, died on July 10, 2017 at his home in Shelbyville. A native of Shelbyville, Mr. Bomar was the son of the late James L. Bomar, Jr. and Edith Dees Bomar. He is survived by his wife Adrian Thompson Bomar; daughters Mary Alice Bomar and Jo Ann Dunham of Crimora, VA; Jackie Bomar Pulver and Eric Pulver of Reno, NV; son Wayne Bomar, Jr. and Valerie Bomar of Owatonna, MN; step-sons Brian and Derek Price; brother James L. Bomar III of Bell Buckle and grandchildren Ava and Lyla Pulver, and Cora and Andrew Bomar. Mr. Bomar attended UT Knoxville and received his degree in forestry. He was the first freshman member of UT Singers, singing with the group for 5 years. He began his career farming the family farm, received his law degree from the YMCA Night Law school and began practicing law at his father’s law firm. Later, he was a former trust officer at Peoples National Bank and an attorney in Shelbyville. He loved singing, traveling with his family, the outdoors and was an avid fisherman. Mr. Bomar was a life-long member of Shelbyville First Presbyterian Church, where he was an Elder, sang in the choir and taught Sunday School. Mr. Bomar was involved in many community activities including an active member of the Shelbyville Rotary Club, director emeritus and legal advisor for United Way and a member of the Middle Tennessee Choral Society. Mr. Bomar founded the Duck River Cleanup over 20 years ago and remained actively involved in the organizing of the event. He helped organize the Duck River Watershed Education Committee that hosts an environmental education fair each year for fifth graders. He and his wife Adrian recently received the 2016 Water Conservationist Award for outstanding contributions to the responsible use and management of Tennessee’s natural resources, presented by the Tennessee Wildlife Federation. Visitation is scheduled on Wednesday from 4-7 PM at First Presbyterian Church and visitation at 10 AM on Thursday followed by a service at 11 AM. In lieu of flowers, memorial donations may be made to First Presbyterian Church Music Department, 600 N. Brittain Street, Shelbyville, TN 37160; the Duck River Watershed Education Committee, PO Box 1247, Shelbyville, TN 37162 or a charity of your choice. Feldhaus Memorial Chapel is assisting the family with arrangements.

Louis Wayne Bomar, age 73, died on July 10, 2017 at his home in Shelbyville. A native of Shelbyville, Mr. Bomar was the son of the late James L. Bomar, Jr. and Edith Dees Bomar. He is survived by his wife Adrian Thompson Bomar; daughters Mary... View Obituary & Service Information

The family of Mr. Wayne Bomar Sr. created this Life Tributes page to make it easy to share your memories.

Send flowers to the Bomar family.