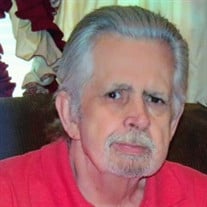 Mr. Weldon Ray Bush, age 72, passed away January 26, 2019, at home surrounded by his family after a two year battle with cancer. Funeral services will be 1:00 P.M. Thursday, January 31, 2019, at Feldhaus Memorial Chapel. Brother Carroll Crosslin will officiate with burial to follow at Willow Mount Cemetery. Visitation will be 4:00 – 8:00 P.M. Wednesday, January 30, 2019, at the funeral home. He was a 1964 graduate of Shelbyville Central High School and was retired from Eaton Corporation after 36 years of employment. He enjoyed fishing and playing softball. He coached his daughters for many years in the Hilliard Gardner Softball League. Mr. Bush was born on July 17, 1946, to the late James S. and Martha Loyd Bush. He is preceded in death by three brothers, Larry Bush, Roger Bush, and David Bush; and one sister, Sharon Bush Gordon. He is survived by three daughters, Robin (Mike) Wright, of Belvidere, Tennessee, Susan Gale Bush, of Shelbyville, and Melinda (Chris) Bandy, of Smithville, Tennessee; three sisters, Martha Lynette Sullenger, Peggy (Randy) Haynes, of Shelbyville, and Nancey Bakeman, of Lynchburg, Tennessee. He is also survived by a very special friend of 30 years, Linda Susan Andrews, of Nashville, Tennessee, and a very special young lady that went above and beyond the call of duty, Lauren Collins. Not only was he called “Daddy”, but he was also called “PeePaw” to his six grandchildren, Kyle Nash, Justin Taylor, Colby Kelnhofer, Savannah Wright Haddon, Julie Kay Hill, and Breanne Kelnhofer; and four great-grandchildren, Alexis (Gracie), Hayden, Hunter, and Jax. Mr. Bush was of Baptist faith and loved all of Elvis’ gospel songs. Feldhaus Memorial Chapel is assisting the family with the arrangements.

The family of Mr. Weldon Ray Bush created this Life Tributes page to make it easy to share your memories.

Send flowers to the Bush family.