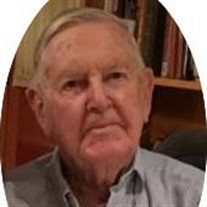 Mr. William “Bill” Lamb, age 93, of Shelbyville, passed away Monday, January 30, 2017. Funeral services will be 10 AM Friday, February 3, 2017, at Blankenship United Methodist Church. Reverends Jack Carney, Dewey Smith, and Abe Zimmerman will officiate, with burial to follow in Willow Mount Cemetery. The family will receive visitors Thursday 4-7 Pm at Feldhaus Memorial Chapel. He was born November 19, 1923, in Bedford County, to the late William Boyd and Clevie Davis Lamb. He was a member of Blankenship United Methodist Church, and active in the Blankenship Choir. A veteran of World War II, he served in the European Theater of Operations. He retired from First national Bank in 1998, after 30 years of service. He held membership in the Veterans of foreign War, American Legion, and Farm Bureau. In addition to his parents, he was preceded in death by his wife Edna Pinkston Lamb. Survivors include his son Tom (Jan) Lamb, of Shelbyville; granddaughter, Layne (Zeke) Tomaselli, of Hilo, Hawaii; three great grandsons, Kaimana, Kainalu, and Kainakoa Tomaselli, all of Hilo, Hawaii; a sister, Frances (Ray) Rowland, of Shelbyville, and several nieces and nephews. Memorials may be made to Blankenship United Methodist Church. Feldhaus Memorial Chapel is assisting the family with the arrangements.

The family of Mr. William "Bill" Lamb created this Life Tributes page to make it easy to share your memories.

Send flowers to the Lamb family.