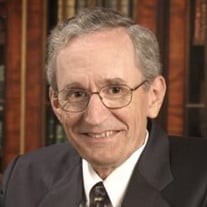 Dr. William (Bill) Lester Sanders of Columbia, Tennessee, passed away Thursday, March 16, 2017 of natural causes at Williamson Medical Center, surrounded by his wife June Rivers Sanders, daughter Sarah Sanders Teague, son Will Sanders, and his stepsons Brian Rivers and Mark Rivers. Sanders was born the son of Lester and Sara Sanders in Shelbyville, Tennessee, on April 26, 1942. He grew up in Bedford County with his two sisters Sylvia Sanders Pinson and Mary Grace Curlee, as well as his cousin Charlene Pickle Judd. Bill was a graduate of The University of Tennessee, where he received a bachelors of Science degree in animal science in 1964, and a doctorate in Statistics and Quantitative Genetics in 1968. Throughout his time as a student at The University of Tennessee, Sanders was an active member of Alpha Gamma Rho Fraternity. Beginning in 1972, Sanders created and led a statistical and consulting group for the Institute of Agricultural Research for The University of Tennessee system. Over the next 28 years, Sanders worked with scientists to plan experiments and analyze the resulting data on research projects ranging from agronomy to physics. One of his research projects modeled the nutrient flow in the Peace River system in Florida, which proved that the environmental degradation in the Gulf was not a function of the development along the west coast as was previously thought but rather was a result of the phosphate mining activity in Central Florida. Other projects were as wide ranging as developing a forecasting system for Bike Athletic to improve forecasts for over 2,500 different inventory units to working with a longtime friend to develop a process that improved calibration of an invention that measures fiber properties. Sanders also served as an adjunct professor of statistics for the College of Business and later became the director of the Value-Added Research and Assessment Center at The University of Tennessee. One of many highlights of his career was a study that demonstrated the lasting effects of educational practices on future student performance. As a result of this research, Sanders developed the Tennessee Value-Added Assessment System (TVAAS), also known as the Educational Value-Added Assessment System (EVAAS), a method used to measure a district, school, and teacher’s effect on student performance by tracking the year-to-year progress of students against themselves over their school career with various teachers’ classes. Sanders went on to be the senior manager of Educational Value Added Assessment Services at SAS Institute© in Cary, North Carolina. Sanders stood for a hopeful view that teacher effectiveness dwarfs all other factors as a predictor of student academic growth. His position challenged decades of assumptions that student family life, income, or ethnicity has more effect on student learning. Sanders believed, simply put, that educational influence matters and teachers matter most. Since 1992, Sanders’ work has been the foundation of the accountability system in Tennessee. Sanders became a national leader in value-added assessments and his work is key to education policy discussion across the country. It has changed the way teachers assess students, principals assess teachers, superintendents assess principals, and school boards assess superintendents. Sanders work was dedicated to enabling parents, educators, and lawmakers to better assess the effectiveness of educational practice. For his many achievements in the field of education, the Education Commission of the States named Dr. William L. Sanders the 2015 recipient of the James Bryant Conant Award, one of the most prestigious honors in the field. In doing so, Sanders joined an esteemed list of past recipients, including Thurgood Marshall, E. D. Hirsch, Fred (Mr.) Rogers and Lamar Alexander. Throughout all of this, his family was the constant joy of his life. He was also an avid golfer, quail hunter, and breeder of English setters. Fitting his family genealogy within the broader context of the settling of his country and state filled many days. Always observing and questioning, his goal was to learn something new every day. Sanders is survived by his wife June Rivers Sanders and the Pallbearers: daughter Sarah Sanders Teague and her husband Matthew Teague; son Dr. William Gordon Sanders and his wife Reetu Gowdar Sanders; stepson Brian Lee Rivers and his wife Tracy Blackwell Rivers; Mark Evan Rivers and his wife Angela Barrett Rivers. He is also survived by sister Sylvia Sanders Pinson; sister Mary Grace Curlee and her husband David Curlee; and cousin Charlene Pickle Judd. Sanders also leaves behind eight grandchildren, all of whom are Honorary Pallbearers: Ava Jean Teague, Locke Jameson Teague, Rohan William Sanders, Sonia Lucille Sanders, Evan Barrett Rivers, Rogan James Rivers, Dylan Reed Rivers, and Ewan Jude Rivers. Additional Honorary Pallbearers include his brothers of the Alpha Gamma Rho fraternity and The Old Golfers of Graymere, including Waymon Hickman, Joe High, Alvin Moore, J. B. Shepard, Stan Keely, Richard Kennedy, Dan Wheeler, Julius Johnson, and others. Visitation will take place at Feldhaus Memorial Chapel in Shelbyville, TN on Saturday March 18, 2017, from 4 pm – 7 pm. A celebration of life will follow on March 19, 2017, at the Shiloh United Methodist Church in Wheel, TN at 2 pm. Dr. Sanders believed that the purpose of all education is to provide more students with more choices in life. In lieu of flowers, the family requests donations in memory of Dr. Sanders made to the Shiloh United Methodist Church Scholarship Fund c/o Jennifer Trott, 270 Card Road, Shelbyville, TN 37160. The Shiloh UMC Scholarship Fund aims to provide the community members support for community college, university, trade school or other opportunities.

The family of Dr. William "Bill" Sanders created this Life Tributes page to make it easy to share your memories.

Send flowers to the Sanders family.